Struggling Rockets get back on track 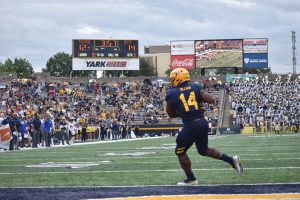 The UToledo Rockets football team won a hard fought, rain-filled game against the Eastern Michigan Eagles on Saturday, October 26 at the Glass Bowl.

For the conditions, it was quite a testament of both teams to have scored as many points as they did, as the Rockets prevailed with a thrilling 37-34 overtime victory.

The victory by the Rockets came after two straight losses to conference opponents, Bowling Green and Ball State. Both losses saw the normally potent Rocket offense severely stifled by the opposing defenses.

In his first start of the 2019 campaign, third-year Eli Peters found success in the passing game for the Rockets but the true showstopper of the afternoon was second-year running back Bryant Koback. Koback had a career day on the ground with 259 yards and two scores.

The Rockets rushed for a total of 336 yards. Third-year running back Shakif Seymour added to Koback’s numbers with 94 yards and a score.

The game seemed to be out of reach for the Eagles late in the third quarter after the Rockets extended their lead to 31-10. Slowly but surely, the Eagles chipped away, putting a score on the board late in the third and, after failing on a two point try, the score was 31-16 going into the fourth.

The Eagles started with the ball in overtime, but the Rocket defense was able to make a stand and force a field goal that split the uprights to make the score 34-31, Eagles. All that Peters and the Rockets needed to win was a touchdown and on a third and 10; Peters connected on a touchdown strike to third-year tight end Drew Rosi to end the game with a Rocket win.

The victory puts the Rockets at 5-3 and 2-2 in conference play with Kent State paying a visit to the Glass Bowl on Tuesday, November 5.